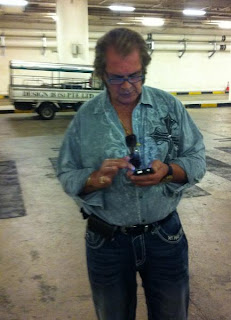 This photo of Engelbert tweeting was taken during his recent trip to Singapore.

BTW if I seem more than usually disconnected from the ground the past few days, it's because Engelbert answered one of my comments on his web site! Over the moon doesn't begin to describe my state.
Posted by Catreona at 8/16/2011 05:42:00 PM 0 comments
Labels: harmless fun

The New Horizons mission to Pluto is right on course for its 2015 close encounter with the king of the Kuiper Belt. Read the latest update:

An exo-planet has been discovered which is coal-black and reflects less light than black enamel paint.

It’s not a bad day. I’m not sick, though I am unaccountably tired. But it’s one of those days when nothing seems to go right.

All excited to get back to work on “Should I Lie?” and “Forgotten Promises,” I found that Cakewalk has no sound. The computer itself has sound, and Window-eyes is talking, more or less. But there’s no sound in Cakewalk. As always when this happens, I can’t remember how to fix it. As far as I can tell, nothing is muted, in Cakewalk or in the system as a whole; and, with that discovery, my invention and imagination failed utterly. I have no idea what else to check. So, no songwriting.

Next I went to purchase my e-tickets for Engelbert’s webcasts on Wednesday and Friday, and found obstacle after roadblock. Finally got through the process, but the promised confirmation e-mail hasn’t arrived. So, it’s a matter of conjecture whether I’ll be able to tune into the webcasts. Of course, it’s a totally different question whether my computer can sustain the webcasts. But, that’s something only time will tell.

It seems I neglected to report that, in the Spring, I sold, yes sold, for real, cash money, my two, interrelated Sestinas, "The Troubadour's Song" and "The Lady's Song," to Breath and Shadow an online, semi-pro journal. Here's the link:

Current bedtime reading/listening (both being commercial audiobooks from Audible) is Tarzan and the Jewels of Opar by Edgar Rice Burroughs and The Farthest Shore: the Earthsea Cycle, Book Three by Ursula K. Le Guin. Each is enjoyable in it's own way, though they are very different.

Burroughs was a fine writer. His early books reflect their pulp origins, but his later books show sophistication of both craft and thought. As to Le Guin, what can I say? She has long been one of my favorite writers from the reader's standpoint and one of my heroes from the writer's standpoint. The Earthsea Cycle, so far, is a wholly lovely series, engaging and absorbing. Recorded Books' choice of Rob Englis, narrator of The Hobbit and The Lord of the Rings to read The Earthsea Cycle shows sensitivity and discernment; for Le Guin's work is very much in the spirit of Tolkien's, though different and distinctive. Both Earthsea and Middle-earth are worlds one can imagine living in which, to me, is the mark of a gifted storyteller.

I've also been listening to two new, to me, LPs that arrived over the weekend, The Very Best of Engelbert Humperdink and I Wish You Love, also an Engelbert compilation. I Wish You Love is a particularly excellent record. The first cut on Side One is "After the Lovin'" - How much better can it get than that? The record also includes "quiet Nights," "Winter World of Love" and "Quando, Quando, Quando," to name a scant handful, as well, of course, as the title song. The compilers might have created this record just for me. It's not on RYM though, so I'll have to add it. Irritatingly, my scanner isn't large enough to accomodate LPs, which means I won't be able to upload the album cover. But, you can't have everything. *sigh*
Posted by Catreona at 8/01/2011 10:59:00 PM 0 comments
Labels: books, Music, What I'm Up To
Newer Posts Older Posts Home
Subscribe to: Posts (Atom)