Today we begin the period of preparation for the coming of Baby Jesus, the Second Person of the Most Holy Trinity, who became Man, entering into His creation to redeem us.

We should use this time not only to look forward in joy, but also to look into our own hearts and prepare them to be a place fitting to receive Our Lord.

It's hard in today's world, filled with violence, hatred and distrust. Here in the U.S. protests continue, some peaceful but some otherwise, over the grand jury's decision not to indict a Ferguson, Missouri policeman (who is white) for the fatal shooting of an unarmed teenager (who was black).

Though I am disturbed at the decision, it baffles me how setting fires and looting and other violent, lawless acts can possibly help the situation. I'm not even sure what good peaceful protests can do. The grand jury isn't going to reverse its decision. The people of Ferguson, the county and the state need to engage in some hard thinking and equally hard work if they want to correct the conditions that led to this latest outrage, not to behave like mindless hooligans. But smashing things is always easier than designing and building them.

In this season, perhaps more than any other, we need to concentrate on thinking, on designing and building the kind of environment around us and within us where Mercy, Pity, Peace and Love, the four daughters of Truth in Medieval thought, can thrive. 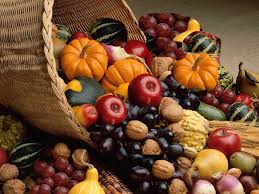 Today is Thanksgiving here in the United States. Shorn of parades and football games, it is a day of reflection and, well, giving thanks for one's blessings. These things aren't so popular in today's world - perhaps they never really were, I can't tell. But in the mad press of commercialism and politics and celebrity news and all the rest of the rush-rush, gotta fill the twenty-four hour news cycle, exploit-umentary, mostly empty blather of modern life it is nice to be reminded to pause and think.

As you know, Dear Reader, for some time I've belonged to Fun Trivia. Indeed, I received my Old Timer badge for five years of membership in March, though I haven't been active all that time. Took a sabbatical of several months along the way. I'm active now, playing quizzes and games, taking on challenges to earn badges, participating in discussion threads and, rather absorbingly, playing in The Global Challenge,Quizziland's periodic tournament.

I also write quizzes, with twenty-four under my belt. Currently working on Silver, a general quiz with questions from across Fun Trivia to celebrate No. 25. It's not easy. The great majority of my quizzes are on Pop music, with a couple on Literature. One needs to stretch one's wings now and then, I suppose. And naturally, there is a book question and a song question in Silver; those were the first questions I thought of. Still, I'll be glad to get back to my comfort zone. Several Music and Literature quizzes are awaiting my attention. Always so much to do!

Recently I read and enjoyed Simple Dreams: A Musical Memoir by Linda Ronstadt. Her descriptions, especially of the Arizona desert where she grew up, are vivid, her portrait of the California Folk and Rock scene in the late '60s and early '70s, equally clear and engaging. This is not one of those dreadful tell-all books. Her friends and romantic interests make brief appearances if at all, though she does tell a funny anecdote involving Jerry Brown and a dinner invitation to Rosemary Cluney's house. Instead, Linda concentrates on her music and the career path it led her on, though not without one or two insights into her inner self, such as her interest in Berlin between the Wars. Warm, gentle, serious yet with a lighthearted touch, Simple Dreams is an easy yet absorbing read.

Today is the feastday of St. Hugh of Lincoln, a Carthusian monk, the first of his order to be canonized (1220).

A man of sanctity, uprightness and great energy, Hugh accomplished much in his life being an abbot, a bishop, a diocisan and educational reformer, a defender of human rights and a diplomat. At the time of the Protestant Reformation, he was the second most venerated english saint, behind only Thomas à Becket.

St. Hugh of Lincoln is the patron saint of sick people and especially sick children, shoemakers and, curiously, of swans.

Here is a beautiful song written by the multitalented Kay Thompson and sung by the angelic voice of Andy Williams.

Have a peaceful Sunday.

The sere, the yellow leaf

I have lived long enough. My way of life
Is fall'n into the sere, the yellow leaf,
And that which should accompany old age,
As honor, love, obedience, troops of friends,
I must not look to have, but, in their stead,
Curses, not loud but deep, mouth-honor, breath
Which the poor heart would fain deny and dare not.

Lately, I've been reading and rereading thrillers by Dick Francis, the British champion jockey turned master mystery writer, whose books first came into my hands when I was a teenager in the '70s. I've read a fair number of his 40 plus books, and plan to read them all eventually.

Whether it's one I've read before or a new adventure, every book is interesting, exciting and beautifully written. His descriptions of the English countryside are vivid; his insight into human nature sometimes startling in its acuteness.

Always set against a racing background, each book is nonetheless unique, exploring some different aspect of life. For example, Banker's protagonist works in an investment bank and the mystery involves his job. Similarly in Risk, understanding the protagonist's work as an accountant helps in understanding the mystery. In Proof, the wine merchant protagonist has to solve a murder in the world of wine and spirits.

Of course, jockeys and former jockeys appear as Francis heroes as well, my favorite being Kit Fielding, who stars in Break In and Bolt.

Felix Francis, Dick's son who helped with research especially in latter years, has taken up his father's mantle and is now a successful writer in his own right. I've already read a couple of Felix's books and look forward to reading more.

I love my Crosley CR72 Mission Stack-O-Matic Entertainment Center, though mine is in cherry. It's easy to use and has great sound quality. Most of all, I love the stack-o-matic feature, what is sometimes called a record changer. There's nothing better than putting on a stack of LPs and kicking back to enjoy them. And yet...

And yet, you want to share the music you are enjoying. CDs can be imported into iTunes and from there made into videos and uploaded to YouTube (always assuming YouTube doesn't block them). But so many LPs haven't been reissued on CD. It particularly seems that a lot of Engelbert's LPs haven't been reissued. And an LP is analog, by its nature cut off from the digital world...until now.At Hammachar Schlemmer I found a record player you plug into the computer and, with the included software, convert your vinyl to digital. It's wonderful!

So, I've made a start and have already put up my first vinyl-to-digital transfer on YouTube:

Soldiers of the 353rd Infantry near a church at Stenay, Meuse in France, wait for the end of hostilities. This photo was taken at 10:58 a.m., on November 11, 1918, two minutes before the armistice ending World War I went into effect

In November 1919, President Wilson proclaimed November 11 as the first commemoration of Armistice Day with the following words: "To us in America, the reflections of Armistice Day will be filled with solemn pride in the heroism of those who died in the country’s service and with gratitude for the victory, both because of the thing from which it has freed us and because of the opportunity it has given America to show her sympathy with peace and justice in the councils of the nations…"

from "History of Veterans Day" on the web site of the U.S. Department of veterans' Affairs

In this year, the centennial of the start of "the War to End All Wars," we should reflect with special solemnity on the sacrifices made by both the service members and the civilians caught up in war. And, as we look around the world at the conflicts, the wars destroying countries and lives today, we should pray for God's forgiveness and ask Him to heal our hearts so Mankind can finally reject violence and instead live in peace and love.