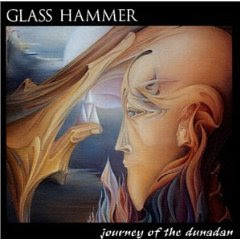 Journey of the Dunadan
GH's first album, Journey of the Dunadan is based on The Lord of the Rings by J.R.R. Tolkien. "Derived from" might be a more apt phrase, since the storyline of the album diverges markedly from that of the novel. With plenty of varied, memorable and, above all, whistlable melodies and interesting lyrics, this album introduced the tradition of excellence for which Glass Hammer has become justly renowned. 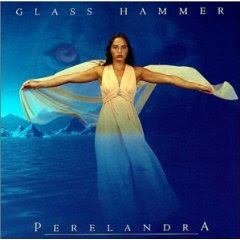 Perelandra
This dark fantasy is based in part on C.S. Lewis' The Chronicles of Narnia and in part on the books of his Space Trilogy. But the underlying story, like those of most GH albums, was dreamed up by founding members Fred Schendle and Steve Babb. And, it is indeed dark and dreamlike. There's evil here, fighting to overcome goodness and love, just as it does in our lives. Here, however, it is embodied in a magician called Liusion, whose power surges through the music, hypnotic and seductive. In the end, though, Perelandra escapes or, does she? 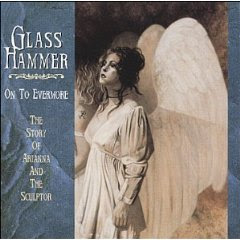 On to Evermore
Liusion is once more at work in Longview, wrecking lives, breaking hearts, and trying to bring about the reign of the darkness of hatred and fear. Though there is darkness and sorrow in On to Evermore, there is light as well and the hope of redemption.

There is, of course, also much great music, both instrumental and vocal. The album is also noteworthy for the debut of Walter Moore, longtime GH
drummer, as a lead vocalist.