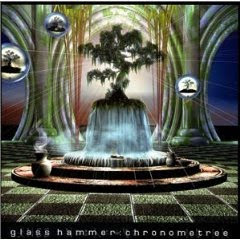 According to Glass Hammer's official web site their new album, Chronometree (May 1, 2000), is an affectionate spoof of 70s Progressive Rock. This should be immediately evident to anyone who grew up in and absorbed the atmosphere of the 70's (to say nothing of older and wiser souls) even if, like mine, their understanding of Progressive Rock trends of the day was all but nil. There's a feeling in this album that even I recognize as not just familiar, but comfortable, as if a part of myself were externalized and crystallized in the music. The first listen felt like coming home; though, with a half rueful, half selfdepricating smile.

This is not surprising, since Fred Schendel, whose project the album principally is, is some two months younger than myself, having been born in March 1964. As isolated as my disabilities made me during my growing up years, clearly I absorbed the essentials of the same world Fred grew up in.

The melodies, the arrangements, and the production/presentation of this album are all superb, the lyrical sections blending seamlessly with the louder, more turbulent sections, the whole presentation creating and sustaining a dreamlike atmosphere. Only the self-consciously mannered musical and vocal presentations and the slightly silly lyrics give away that Chronometree is a takeoff.

An Eldrich Wind, my favorite track, illustrates the point very well. The song has a beautiful, haunting melody supported by a sensitive, almost minimalist arrangement which relies heavily on the guitar. Meditative, sweetly melancholy, the song leads you into that state where memory and dream, past, present and future become one and your heart is open, yearning for what is beyond.

Or, it would, if you didn't pay too much attention to the lyrics and the way they're presented. apparently mesmerized by watching his record (or more probably the label on the record) spin, Tom, the hapless hero of the album's storyline, falls into a trance like state in which he believes that voices from beyond this world are speaking to him through the music, calling him to a higher reality in other worlds. That is, he has a mystical experience. But, though it seems very rich and wonderful to him, it seems just a touch inauthentic and laughable to the outside observer, the listener, though I can't help also feeling just a bit sorry for Tom.

His mystical experience would seem, if his slurred speech and insistently earnest manner are anything to go by, to be made up of a Pot high, loneliness, and a desperate longing to belong somewhere and to have something of his own to cherish. Probably all of us, including those who have never tried Pot, can relate to this state of mind. And we smile in our greater experience and wisdom, knowing that he has been called to nothing beyond a nap.

Perhaps younger listeners miss this obvious though gentle point. And, though this knowledge adds a dimension of fun to the album, I suppose it is not strictly necessary for enjoyment. However, to state the obvious, Chronometree is a progressive rock album about listening to progressive rock.

It's also about the dangers of taking any art form too seriously, and of taking oneself too seriously. To Tom, Chronometree reveals itself as the revolutionary new science of time. But, in the end, it reveals itself as nothing more nor less than the science of wasting time. Tom is a sort of cross between Don Quixote and Linus Van pelt waiting for a Great Pumpkin who never arrives.

Whether regarded as spoof or straight Prog this, Glass Hammer's latest effort, displays their talent to great advantage. I'm a great fan of Fred's and so, wile enjoying his keyboard wizardry, I was disappointed that he seems to have no vocal presence at all on the album. However, Brad Marler's vocal work, if not a sufficient substitute in the view of the Fred-smitten, is certainly up to GH's usual standard of excellence.

The increased prominence of guitars, besides fitting well with the album's theme, builds on work familiar to GH fans from Journey of the Dunadan, Perelandra, and On to Evermore. The orchestral passages, too, indeed the album as a whole, seem familiar and yet delightfully new as GH continues to grow and develop, as any dynamic organism will. Chronometreeis a worthy successor to the band's previous discs, crowning earlier accomplishments, while foreshadowing future triumphs.
Posted by Catreona at 12/07/2009 12:11:00 AM
Labels: Album Reviews, Glass Hammer, Reviews