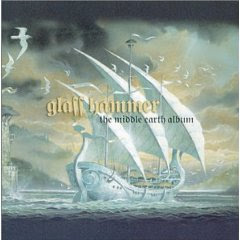 According to Glass Hammer's Steve Babb and Fred Schendle, The Middle Earth Album (June 15, 2001) was recorded, at least in part, live at a concert given by the band in the village of Bree, the Breeland, Middle-earth. And, who am I, a humble fan, to argue with Steve and Fred? They also say in a RealAudio interview on their official web site that many of those in the audience already knew their songs and were able to sing along. Again, incredible as this claim sounds, who am I to argue; especially when the evidence is there on the album. We do not hear Barlyman Butterbur introducing the musicians as he introduced Strider's The Way to her Heart on Journey of the Dunadan. Nonetheless, apart from this regretable omission, the inn atmosphere is unmistakable and embracing.

The album has the feel of a cross between a Medieval fair and a folk concert. This is not surprising given the nature of Middle-earth, which is a pre industrial, bucolic sort of place inhabited by Elves, dwarves, hobbits and, of course, men. The inhabitants take music quite seriously, and made the band welcome, or so the listener gathers. The rowdy but good natured audience comments and joins in the chorus of several songs with gusto.

Indeed, this is very much an audience participation affair. I was sorry to find that the entire album was not recorded live at the Prancing Pony. However,
the several studio tracks maintain the live Folk feel. I don't understand the wizardry of recording, but I know that the studio tracks blend seamlessly with the live tracks, being all but indistinguishable except for the absence of background pub noise and applause.

Along with the usual suspects, Steve, Fred, Walter Moore, and Brad Marler, several of the studio tracks feature the Glass Hammer girls, Suzy Warren, Felicia Sorenson, and Sarah Snyder. Their voices form interesting textures and contrasts of timber with the usually all male GH vocal ensemble. It's a pity that we don't
here the audience's response to the girls. We do, however, hear their response to Fred and Steve, which is positive if somewhat disorderly.

In contrast to his vocal absence from Chronometree, Fred is very much in evidence on this album with several lead vocals, some nice ensemble work, and a couple backing vocals. As comfortable with a lyrical love song as with a hard driving number, here he proves himself equally at home with Folk style ballads as with Prog.

Dwarf and Orc, a comic account of Balin Longbeard's assault on the king of the goblins' cache of beer, and The King's Beer, an encomium to peace and Barleiman Butterbur's famous brew, seem particularly popular with the audience at the inn, as does The Ballad of Balin Longbeard. This last will be familiar to longtime GH fans from its appearance on Journey of the Dunadan.

Also familiar is This Fading Age, a lament for Gandalf the Grey which, to my continuing mystification, first appeared on On to Evermore. I'm glad to see it here. Like a plant set amid its native habitat, on this album its loveliness is no less though differently set off than where it is an exotic. And, This Fading Age is lovely. Lyrics combining hope and melancholy set to a melody that is, in Tolkien's phrase, sad but not unhappy capture well the conflict felt by the Galadrim, the tree folk of Loth Lorien, between the slow moving time of their enchanted land and the tumult of the outside world. Here Susie joins Fred, Steve, and Walter, her sweet, light, and slightly husky mezzo making the song seem even more ethereal and Elven than in the original version.

The band departs from the Medieval/Folk style only once for what is, for my money, the best song of the album. Sweet Goldberry, a musical interpretation of Tolkien's poem The Adventures of Tom Bombadil, features the signature GH sound and lead vocals by Walter Moore. Lighthearted yet deeply felt, this song expresses the sustaining love between Tom and Goldberry. Walter's clear, intense solo, with backing vocals by Fred and Steve, brings the familiar story vividly
to life.

Indeed, each of the songs on the album tells a story though, unusually for GH, the album as a whole does not. This is because it is part of a larger story, one written by Steve. Rangers, Dwarves, Trolls and Maidens or A Halfling's Holiday in Bree tells how many of these songs came to be written and of a hitherto unknown facet of GH's activities. Though one may enjoy The Middle Earth Album on its own, the story lends context and added interest to this album that looks both back to the band's roots and forward to further growth lyrically, musically, and in the realm of storytelling.
Posted by Catreona at 12/12/2009 03:14:00 PM