Well, Knock ME Over With A Feather! 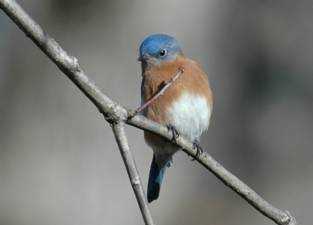 Have you ever had a moment, as a writer or other sort of artist, when you received unexpected recognition or worthwhile comment on your work, and the experience just knocked you over with unimaginable joy?!

This is not a rhetorical question; please share your "bluebird of happiness" stories!

An article I wrote was published in December in a magazine that comes out every two months. This morning I received word from a peer in R.I. that the new issue includes "a full page of letters to the Editor (including one from the Executive Director herself) affirming" the article! A short while later I received word from another peer in MA saying: "Did I share with you that copies of your article were given to us at the Residency? Excellent and so important to the dialogue."

Given that in the past whenever I have gone out on a limb and spoken out about something regarding the ministry I offer, I have been met with resistance and disdain, I am feeling a bit startled! So, it may take awhile to receive this news, but I will continue to savour it.

Now, I really DO want to hear your stories!
Tell us your "greatest response" and JOY story.

BTW, the photo is by my wildlife biologist Son in NC.

How does one get a Gravatar on Blogger? It doesn't ask my email addy, which my gravatars are linked to...so?

listener, I'm not JC, but I'll tackle your question anyway.

The image on JC's comments, and on some other people's comments that you might see at Puddle's blog, aren't gravatars. They are the images those people have placed in their profiles. If you go to JC's profile, you'll see that rainbow image. I don't have an image in my profile; a lot of people don't.

As far as I know, there's no way to add a gravatar as such. You could add your water lilly or black hole to your profile. Then, when you post to Blogger sites, that image would show up on the ones that have user profile images enabled.

I'm a little groggy. Went to have a bit of a lie down around 8:00 and fell asleep. It's kind'a hard to readjust.

When I go to my profile to add a photo, it only wants urls but I'm trying to post up a photo from my own files. How do I do that?

Written after watching ABC's Freakonomic Friday segment tonight about what helps children with standardised test scores. Apparently they've done a study that shows that reading to your children, taking them to museums, and being home with them makes no difference whatsoever in their standardised test scores. What matters is having books in the house and being highly educated yourself. This was touted as good news. Here's what I wrote in response:

In your story about what may help children with test scores, I felt you missed an essential point. I hope no viewer goes away thinking that it doesn't matter whether or not they read to their children, and so on, because the obvious point, as I see it, is that test scores do not reflect healthy living! If taking young children to museums, reading to them, and so on, doesn't help test scores, then it's the tests which are inappropriate to life, not life that is inappropriate to the tests!

You have to have the photo stored online. The easiest way I've found is to do a post here on the arty blog, put the picture you want to use in the post, and put it in draft (rather than publishing). I have a few posts that I've left in draft for a few months, just to have the pictures. I haven't tested whether you can delete the posts once the picture is uploaded. It may stay online once it is put online.

The picture will be uploaded to blogger's online image storage, and you can use the same URL (found in the HTML view in the blogger dashboard) to add that picture to your profile.

Otherwise, you have to load it to your own website or some place like photobucket.com, where it must stay indefinitely, because blogger will keep reading it from that location rather than storing it here.

If you just want to use the same picture of the water lily that's already posted on the arty blog, you can just find the URL to that and refer to it in your profile.

The lily URL is way too big to use, according to blogger. How Cat used it I have no idear.

listener, your letter to WNT is right on. I can't imagine any responsible person suggesting that reading to children etc. makes no difference. It is indeed the tests that are wanting.

On the other hand, reading to one's child and being home with her doesn't automatically make a well rounded, curious child. Our next door neighbors read to their little girl, and the mother stayed home. Clearly, they loved her and gave her a lot of attention. They had her working out in the yard with them from an early age; but, they didn't teach her anything about plants and animals. She didn't know flower names, or anything when she was little. Rather than museums and the like, they took her to the stock car races and had her watching football. She was a great swimmer and had dancing lessons from an early age... She was a late reader, and didn't seem interested in reading. As a little girl, she was sweet, caring sensitive, alert to anything that would be helpful to others and, conversely, on the look out for anything hurtful. She was a delightful child with endless potential.

Now in her early teens, she isn't interested in anything but socker, and she makes fun of another neighbor girl, about her own age, who loves to read and is very curious. The father graduated from Bodwin(sp?) and the mother's family owns a hair dressing business in NH. We're not talking uneducated people, here. Yet, they have taken a beautiful, brilliant, sweet child and turned her into a common, boring serly person. It's a heartbreaking waste. She could have been anything and been a star at it. Now, whatever profession or trade she chooses to pursue, she'll be totally unremarkable and probably have a boring, monotonous life. Somewhere along the way, whether it was her parents' fault I don't know, she lost her curiosity and sweet personality. Now, she's just another kid.

listener, I think we *may* have a potential solution to your pic problem.

Remember way back at the inception of this blog, mprov told you about something called Hello? Well, it seems this is the system that's integrated with Blogger. If I read the info correctly, you download the Hello software, and *that* allows you to upload images to your Blogger blog. Since you are a member of this blog, it ought to work here.

Check out the info at the link below and see if it's going to be suitable.

BTW I'm unclear on whether this system will allow you to post a pic to your profile. You'll have to check that out yourself. It sounds like a potentially good tool, though.

Aha, it works! Behold the feminine pulcritude of yours truly! LOL

As to how I got the water lilly URL on the blog: it's in the template for the blog itself. Quite easy, actually. That's where I parked my photo as well.

Just a note of something to keep in mind, the blogger thingy that allows you to update your profile is very persnickety. It does not accept .jpg. It must be .jpeg. IIRc .gif and .png are also acceptable. That's the sum total of what I've learned and done today. *sigh*

Thanks, Cat ~
Mine are all jpg files, so I'll think about it awhile.

As for how much parents influence their children's attitude and success:
Well, I think we give parents not enough credit and way too much blame, generally speaking.

My parents did nothing and provided nothing. We never went anywhere. I lived near the ocean when I was 7 but never knew it!! I didn't learn to swim until I was an adult, and didn't even know about public library cards until I was 20 years old ~ largely because we moved every year or two and had no public transportation.

Nonetheless, I went to four different high schools and graduated third in the class. Then I went on to home school my children, and you can believe they knew about libraries and read-alouds and swimming and dance class and working at the museum and family trips to sites we'd read about. ETC!

Have they fared better than me?
We'll see.
They are all wonderful people, creative and caring, and have all contributed to society (and not a Republican among them ~ ha~!). But they have DONE far less than my hubby and I had done at their age. They haven't had to scrape by as much, so haven't had to dig in and see what they're made of, to quite the same desperate level.

At the same time, I have to add that all my siblings have had serious emotional issues to deal with, unlike myself. So I'm not sure what the factors all are.
I'd say it's a combination of parenting, personality, luck, social connectedness, and the depth of the individual's spirituality.

How about using the photo tutorial as a new thread post!

Huh? Sorry, I'm tired, and I don't quite follow. *I* know zilch about photo tutorials. I was just thinking we need a new thread, though. Please clarify what you mean - try "explaining to dense three-year-old" mode, and you might get through to my brain in its current state, and I'll see what can be done.

Catreona, I downloaded Hello, but I STILL can't post a photo because THIS blog is not listed under my blogs!

Does the blog administrator have to ALLOW a blogger to post threads?
I remember that Renee did something like that with the HEP Blog. I didn't sign on to help with new threads then.
But what's interesting is that the ONE blog listed under my name now is the WeveGotDeansBack Blog. So I just posted a note to Renee to see if she can explain how THAT blog got listed under my name.
That might clear up the concern.

Just suggesting that you take your explanation about how to post a photo, which you explained upthread, and make a new thread post out of it, to highlight the possibility of adding photos.

Heading to bed, listener, but yes, you are listed because you accepted the Blogger invite I sent you.
....
Anyway, as I recall, once someone accepts an invite, the head of the blog needs to go into blog settings, under "members" and check a little box that says "admin", then republish the blog.

Must get to sleep now, as I'm supposed to do a reading in church tomorrow morning.

Cat, can you double check that I am so "checked"?

listener, er, thanks for the *very* kind words about my photo.

Yes, you are checked under Admin for this blog. I'm going to read the help file associated with Admin to see whether it might be helpful. Have you posted a main thread at the Dean's Back blog? If you can do that, it will be instructive.

Well, help was *not* helpful. I'm totally baffled, listener. You ought to be able to do all the things I can do to and about this blog, including seeing it on your Blogger dashboard.

I'll put that new thread you suggested up tomorrow. Got to get to bed.